May We Gather: A National Buddhist Memorial Ceremony for Asian American Ancestors 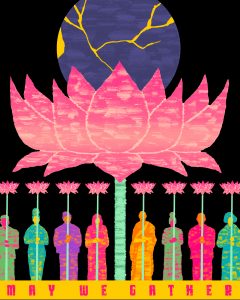 May We Gather: A National Buddhist Memorial Ceremony for Asian American Ancestors (www.maywegather.org) is the first national Buddhist memorial service in response to anti-Asian violence. The ceremony will be livestreamed from Higashi Honganji Temple in Los Angeles, which was vandalized earlier this year. The event will be freely broadcast online and will bring together Asian American Buddhists and their allies to heal in community together.

On May 4th, 2021, exactly seven weeks, or forty-nine days, will have passed since the Atlanta shootings claimed the lives of eight people, six of them women of Asian descent, including the 63-year-old Buddhist Yong Ae Yue. In many Buddhist traditions, forty-nine days after death marks an important transition for the bereaved. May We Gather will feature Buddhist chanting and reflections from forty-nine Asian American Buddhist leaders of South, Southeast, and East Asian descent in a communal ritual to honor people who have died from acts of anti-Asian violence in the United States.

The 90-minute event will be held on Tuesday, May 4th, 2021 at 4pm PDT (7pm EDT). We welcome Asian American Buddhist temples and organizations as well as allied communities and individuals of all backgrounds to participate in this ceremony by endorsing the gathering, sharing it widely, and watching the livestream on May 4th.

One comment on “May We Gather: A National Buddhist Memorial Ceremony for Asian American Ancestors”